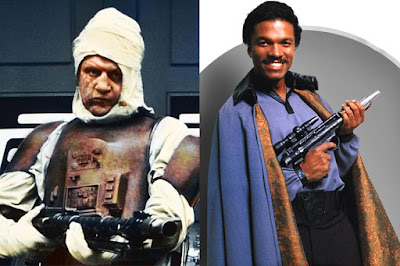 By: Dominic Jones
EA announced today the new heroes that will be included in the second Star Wars Battlefront expansion pack, which will be released this June.  Players will soon be able to battle on Cloud City as Lando Calrissian for the Light Side and the Bounty Hunter Dengar for the Dark Side.
Star Wars Battlefront Producer Craig McLeod made the announcement in a post on EA’s official Star Warswebsite.  He also revealed what else players can expect from the Bespin expansion,
This June, Season Pass holders will also receive our second digital expansion pack, Star Wars™ Battlefront™ Bespin. We’re taking players in and around Cloud City, with four new maps for all of our most popular modes. You’ll see AT-ATs in Cloud City, take to the skies in Fighter Squadron, and even spend time in a carbonite chamber. Of course, we’re also adding more blasters and Star Cards, a new game mode, and two new iconic characters we’re really excited about – Lando Calrissian and the cold-blooded bounty hunter, Dengar.
He also confirmed that two more heroes would be included in the upcoming Death Star expansion (coming this fall) and another two would be added in the four expansion pack which is coming Spring 2017.  In addition, McLeod announced that they were preparing some special in game content for May 4th (Star Wars Day) and that the specifics of which would be announced at a later date.
Source: EA Star Wars