November 24th marks the one year anniversary of the world wide launch of Star Wars: Galaxy of Heroes. On behalf of the entire team here at Capital Games, we want to thank you for playing the game and for your continued support.

Throughout these past twelve months, we’ve been humbled by how millions of people around the world have responded to the game and helped to make it such a success. Having a chance to work on a game based in the phenomenal Star Wars universe is a true honor, and one we take to heart.
Over the past year we’ve added a lot to the game: Guilds, Raids, Mods, Tournaments, new characters, new events, new activities. With the update releasing today, we are bringing forth our biggest update the game has seen: Ships!

Please note that some of these changes are already live, but not all of them will be. As with previous Updates, this may take up to 48 hours to fully roll out to all players. Once the update is available in your region you can manually download it from the App Store or Google Play Store. Thanks!

We hope you and the entire player base love it as much as we’ve loved creating it. 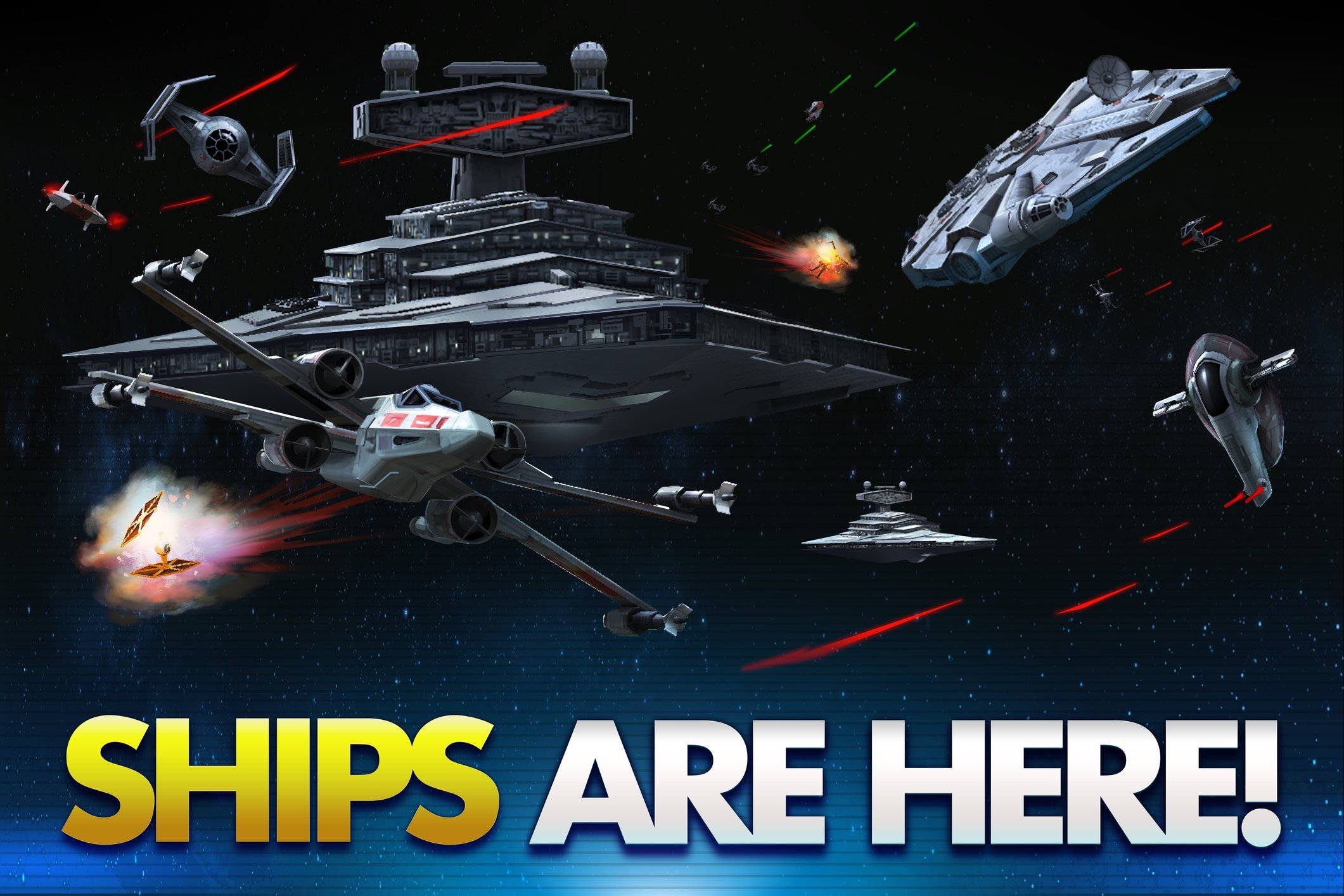 The ability to collect and do battle with ships is not only a massive content expansion to the existing game – it’s another huge step toward fulfilling the fantasy of playing a strategy game that includes all of Star Wars.

Like the rest of the experience, one of our pillars was authenticity. We wanted to get as close as possible to the feeling of crewing iconic ships with iconic characters – ultimately bringing more gameplay value to collecting your favorites of either type. And in combat, each ship’s ability set has been crafted to acknowledge what makes them unique – just like we do with characters.
We also designed in a way to honor players’ engagement in our existing systems, and in a way that would connect both ships and characters. The progression of a character’s star rating is acknowledged in the ship abilities unlock path. And investing in the ship’s star rating brings even more of the crew’s power over to the ship. Increasing a character’s power increases their Crew Rating, and that directly translates into Ship Power.

And because of the many players invested in our game, another pillar was familiarity. In trying to respect the schemas that players already understand: acquiring a ship is like acquiring a character, progressing a ship is like progressing a character, setting up a fleet is like setting up a squad, Fleet Commander are similar but not identical to leaders, and squad strategy is similar but not identical to fleet strategy.

Going back to our original goal of the experience we wanted to bring to players – that has always included ships. And with ships now a part of Galaxy of Heroes strategy, we have a whole new facet of the Star Wars experience to build on in future updates.

Fleet Battles
Fleet battles will be familiar in many respects:

Ship blueprints
Ships are acquired through earning blueprints, similar to collecting shards for characters. There are a variety of locations to earn them, including:

Cantina home screen
The Cantina home screen has been rearranged slightly to make room for the entrance to a new room dedicated to Ships. To access the room a player must be level 60 and complete a series of Fleet Commander Events.
Fleet Commander Training Events
Starting at level 25, players can access a series of special (and free) Events that will reward enough crew and Ships to take part in Ships combat. Additional Events will unlock every few levels leading up to Player Level 60, when the Ships room is available. Players at Level 60 or above, will be able to play through each of these Events sequentially.
The rewards listed below will be given incrementally as you progress in the Events. By the time you complete the series, you will have acquired each of these:
Crew / Ships

Ships Activation/Upgrading
Activating and upgrading ships will also be familiar to players. However, ships are tied directly to their crew members (these Ships can’t fly by themselves).

There are some clear character analogs to the ship’s activation, enhancement, and upgrade
systems. They work in similar fashion though along different paths. Here’s a handy list to
help put them in context:

Ship details will give players all the info on each ship.

Tapping on a ship’s crew member portraits in the details will bring the player to that character’s details page.
Ship Total Power
The key to making a Ship stronger is to improve its crew member(s) and improving the Ship itself.

Character Details (for crew characters)
Once a player has unlocked the Ship Inventory, all crew member characters will have buttons in their details that link to the ship that character is associated with. Players can easily navigate from a ship to its crew member(s) and back again.
Data Cards
To provide a better player experience, the Data Cards portion of the store has been split into two sections:

Ships Room
There is a new area in the Cantina that caters to the ships game. It’s similar to the Guilds room and lives on the far right side of the main area. It will not be available at first, a player must pass several milestones before gaining access:

Once you’ve secured your right to walk into the ship area players will be met with the central hub for all things that have to do with fleets in Galaxy of Heroes. Tables for ship-focused areas are arranged on the room floor, complete with a band!
Fleet Arena
The Fleet Arena is where players can prove themselves battling against the starship might of other players. Players that know the Squad Arena will find the Fleet Arena to be a comfortable place to play.

And always remember: The power of crew members is vital to the power of a ship!
Fleet Shipments
A variety of high value items can be purchased using Fleet Arena Tokens, including:

Earning Ship Resources
Ship Resources can be earned from from a variety of sources outside the Ships room, including:

NEW SQUAD TOURNAMENT- TIE Advanced
A new squad tournament debuts next week! Battle against other Galactic Champions to earn blueprints needed to acquire Darth Vader’s personal ship – the TIE Advanced x1! This tournament is for Players level 30 or above.
Beginners bundle
To welcome the introduction of ships, players will be receiving the Ships Beginner’s bundle when they unlock the Ships Room at level 60. This FREE bundle contains two new materials you need to upgrade your Ships:

BOBA FETT REWORK
Boba Fett returns as December’s daily login character! Thanks to player feedback, this legendary bounty hunter has undergone some changes to increase his effectiveness in hunting down and eliminating his targets
Boba Fett now starts each battle with “Bounty Hunter’s Resolve.” This buff can’t be dispelled, allows him to ignore Taunts, and causes him to revive upon defeat. He regains “Bounty Hunter’s Resolve” each time he defeats an enemy.
“Execute” is now a special ability that dispels all effects on the target and will prevent them from being revived.
In addition to upgrades to his existing skills, he’s gained a new, often requested ability: He now fires his EE-3 Carbine Rifle!”
NEW CHARACTER TAGS
With all the Boba Fett love going around, we couldn’t forget our other hunters out for bounty. A new filter tag has been added to the character screen-Bounty Hunter! This new tag has been added to the following characters