Peace is a lie. This February embrace your passion. Through passion you gain strength. Through strength you gain power, and with that power, the dark side will rise victorious.

Characters:
New Sith characters make their way to Star Wars Galaxy of Heroes for our Lord of Hunger event. For more information on the event, please see @EA_Jesse event Information post. For a sneak peek on these new Sith, read on! 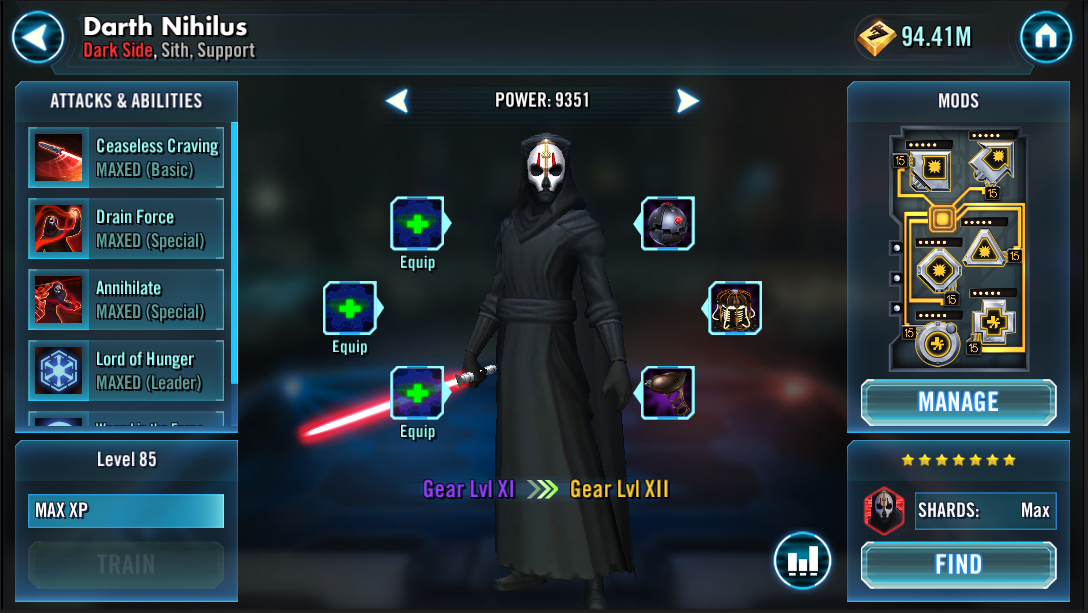 Captain Phasma Rework
She’s a tad late (detour to the trash chute perhaps?), but Captain Phasma is finally here to round off the updates to the First Order faction. Phasma’s VICTORY MARCH ability will now be prioritized over other abilities while under AI control. We have also expanded her Zeta ability, FIRE AT WILL, which now grants First Order allies Advantage for 2 turns at the start of each encounter and prevents them from being Critically Hit while they have Advantage, in addition to previous bonuses.

LORD OF HUNGER PACK
Once you make it through the Lord of Hunger event, Level up your Sith with one of the available Packs in the Store! These packs also include Credits and ability materials. PLUS a chance for an Omega ability material! Please note that there are three distinct and separate packs-listed here:

Each pack guarantees at least 5 shards for one themed character with a chance to get 30 SHARDS! Minimum 5 shards per pack. BONUS with each purchase:

Sith Order Bundle
Unleash your fury with new Sith Order Bundles! Each Bundle contains character shards for ONE Sith character. There will be four bundles available. One for EACH of the following characters listed below:

CHROMIUM UPDATE
A new selection of characters have been rotated into Chromium Packs, with a couple old favorites being rotated out. Here’s the breakdown:
OUT

ALLY POINTS??
We are discontinuing tournaments for the foreseeable future. Given this change, we will be removing ally points from the following locations:

But why? How? Explanation?!? Fret not! Our handy dandy @CG_TopHat will be posting an announcement breaking this change down further soon.
BUGS
LANGUAGE

What’s Ahead
Our next update will focus on quality of life improvements in game. Stay tuned!